The Nike Odyssey React 2 Flyknit came out last year that was a pretty much basic mesh and had a neoprene-style tongue that ran pretty hot but this year with this Flyknit, it is a whole new game. 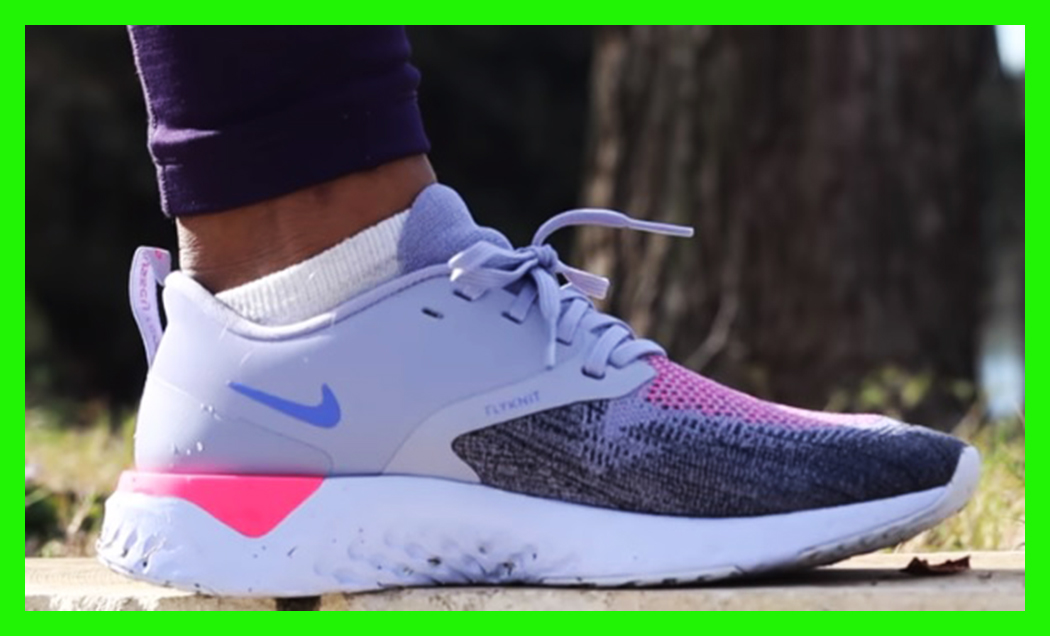 The Flyknit runs through the toe box and towards the mid-foot and we found it to be much more adaptable than last year’s setup it was comfortable on foot and it had a decent lockdown for being on it.

But the overall stability of the upper was improved by the plastic panel wrap that goes from the midfoot and around the shoe. We did not feel pressure from the wrap like we thought we would.

However, breathability felt a bit lacking compared to the non Flyknit part of the upper but the added stability of the upper does seem to be the trade-off.

This is a more supportive fit compared to the popular Epic React Flyknit. The tongue of the shoe is also a Flyknit weave that has a bit of stretch to it and helps maintain that sock light feel.

It has that same light feel and it’s probably the best upgrade to the shoe from last year’s model. That thing was a heat machine so we are glad that Nike fixed it.

The heel is pretty stable. It is not as flexible as some other fine except for those who like a more secure fit, this should do it.

We had a bit of heel slipping so we had to have a shoe with the extra lace loops but that was the easy fix. So far so good but this thing was not all rainbows and butterflies, Nike you did well on paper but the fit of the toe box did take us about a week to actually break in.

We felt the toe box was tapered too much like we would say the toe box was almost a bit pointy and the overall fit was a bit short. We ended up going up a half a size to avoid the fit issue so width-wise, the Flyknit will stretch lengthwise not so much.

The midsole consist of Nike react technology and it is one of our favorites amongst many options out there in the market. Typically react 2 is light, bouncy, and responsive and it has that spark that makes running a bit more engaging.

Now the Odyssey React 2 Flyknit does have all of those qualities but it is just a bit more on the responsive firmer side. It is still comfortable but it is not compressed as much as the Nike Epic React Flyknit.

It is not has a dead flat feeling like that legend react but a bit more stable and that is because of a TPU heel clip that adds a bit more structure to the ride.

Some people want a more stable option and this will fit that bill for those who want some to react in a more controlled package.

The outsole uses rubber and portions at the toe, the sides of the mid-foot, and on the hill. This is more rubber than you get in the epic react Flyknit and we think many would have that peace of mind we have known the reactors a bit more protected.

Now having that extra rubber does cause the show to not be as flexible but once again that also gives the ride a bit more stability. Traction was fine on-road and dirt.

We did not get to try it in the rain. We mean we could have but we were busy trying to finish up to six of Red Dead Redemption. So we will let you know in the comments how it does in the rain when we have another chance.

The Odyssey reacts 2 is just a better overall shoe than last year besides having a size up and having to break in the upper a bit.

Some of you may be fine going through the size depending on your foot shape so you might want to try it on and see for yourself but we weight half a size up and so we honestly was not expecting much from the shoe but we think it did just enough to call it a worthy upgrade.

We still prefer the Epic React lining over this but if you are in need of a slightly firmer and more stable ride, this will be the way to go out of the react models and overall is solid.

It will work for most runs, short runs, and longer runs. It can work as an all-around daily trainer so when it comes to the Nike Odyssey react 2 Flyknit, we do approve.